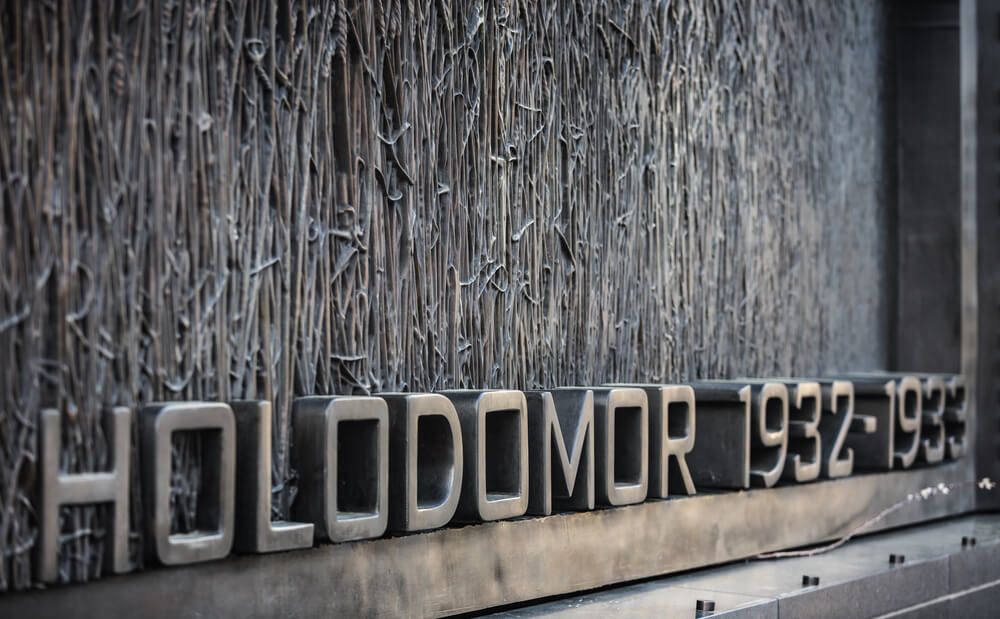 What was the Holodomor, and what does the word “Holodomor” mean?

A few years after Ukraine was forcibly incorporated into the Soviet Union, the Communist regime of Soviet dictator Joseph Stalin embarked on a campaign to break the resistance of the Ukrainian people, especially its fiercely independent farmers. Its plan: engineer and brutally enforce a man-made famine, and starve Ukrainians into submission. The result: in the land called the breadbasket of Europe, millions of men, women and children starved to death. This horrendous act of genocide against the Ukrainian people is known as the Holodomor –murder by starvation.

Stalin orchestrated the Holodomor on the heels of his policy of collectivization. Under this policy, all privately owned land was expropriated, and farmers were forced into collective farms. More than one million farmers who resisted collectivization were removed from their homes, stripped of their possessions, and executed or exiled to distant labor camps. The government imposed exorbitant grain quotas on the collective farms and confiscated all foodstuffs to ensure that nothing would be left to feed the people. Armed units surrounded the stricken territories, preventing people from leaving in search of food. Those who tried to flee were forced back to their homes, where they inevitably died. Those who attempted to hide grain or other food were executed. Withholding or stealing grain, considered the “property” of the Soviet Union, became a crime punishable by death.

Stalin’s attempted extermination of Ukrainians was not restricted to farmers. He also embarked on a program of cultural genocide known as “Russification” to destroy Ukraine’s language and culture, and eradicate its historical memory. Writers, scholars, artists, clergy and teachers were arrested and executed. Most of Ukraine’s intellectuals were killed in these purges, and Ukraine’s development as a nation was crippled for generations.

How many people died?

Determining the precise number of the genocide-famine’s victims remains a difficult if not impossible task. Suppressed population censuses, lack of death records, official denials, and forbidden access to government records were formidable stumbling blocks to get to the truth. Stalin and his henchmen Lazar Kaganovich and Nikita Khrushchev talked of as many as 10 million victims. But with some archives opening up following the USSR’s dissolution and Ukraine’s independence in 1991, demographers, historians and other scholars are revisiting the question of Holodomor’s death toll. A recent estimate cites 4-5 million; 7 million remains the consensus. Everyone agrees that at the height of the famine-genocide close to 30,000 Ukrainians were dying every day. In the end, the fact remains that millions of Ukrainians were purposely starved to death, making the Holodomor one of the biggest crimes in the history of mankind.

What did world leaders do at the time to try to save people from the famine?

The USSR continued to export confiscated grain and other foodstuffs from Ukraine and tried to conceal the famine from the world. In fact, many world leaders knew about the famine thanks to diplomatic and journalistic reports and did nothing.

“Throughout the following summer and autumn, Ukrainian newspapers in Poland covered the famine, and Ukrainian politicians in Poland organized marches and protests. The leader of the Ukrainian feminist organization tried to organize an international boycott of Soviet goods by appealing to the women of the world. Several attempts were made to reach Franklin D. Roosevelt, the president of the United States. None of this made any difference.

The laws of the international market ensured that the grain taken from Soviet Ukraine would feed others. Roosevelt, preoccupied above all by the position of the American worker during the Great Depression, wished to establish diplomatic relations with the Soviet Union. The telegrams from Ukrainian activists reached him in autumn 1933, just as his personal initiative in US-Soviet relations was bearing fruit. The United States extended diplomatic recognition to the Soviet Union in November 1933.”

—Timothy Snyder, Bloodlands: Europe Between Hitler and Stalin
Quoted from Grappling With Holodomor Thoughts On Timothy Snyder’s The Bloodlands by Ta-Nehisi Coates in The Atlantic

I think that for Putin, Ukraine represents a challenge a little bit the way Ukrainian sovereignty was a challenge for Stalin. But, of course, the second reason was that he was using this general famine to target Ukraine. He wasn’t interested in saving people. He wanted the peasants, as a group, to be weakened and he didn’t want people to survive. So there was no effort to collect international aid.”

“Other international factors worked against the famine’s receiving the international attention it deserved. Official British, Italian, German, and Polish documents…show that, although diplomats were fully aware of the famine and reported on it in detail, governments chose to remain silent. The Holodomor took place during the depths of the great Depression and in a period of the profound political crisis in Europe, which saw the rise of fascism and the coming to power of Adolf Hitler in Germany in early 1933.”

The U.S. Committee for Ukrainian Holodomor-Genocide Awareness (U.S. Holodomor Committee) has joined Team Feed to help end hunger in America. No one should go without a meal, yet Feeding America estimates over 54 million people in America will face hunger this year. The U.S. Holodomor Committee has created this fundraiser as a tribute to the 7 million victims of Stalin’s forced famine-genocide (Holodomor) in Ukraine in 1932-33. This fundraiser will promote Holodomor awareness, as well as to help provide those much needed meals to our neighbors through the Feeding America network of food banks. Join in this worthy cause. Please consider donating $19.33 (the year of the severest impact of the Holodomor when millions were starving from hunger). It only takes a little to make a big difference. Will you help in this fight to end hunger in the United States in memory of the 7 million victims of Stalin’s genocide of the Ukrainian nation? Click on the Donate button above and let’s end hunger together! For more information on the Ukrainian Famine-Genocide (Holodomor), please visit www.UkraineGenocide.com